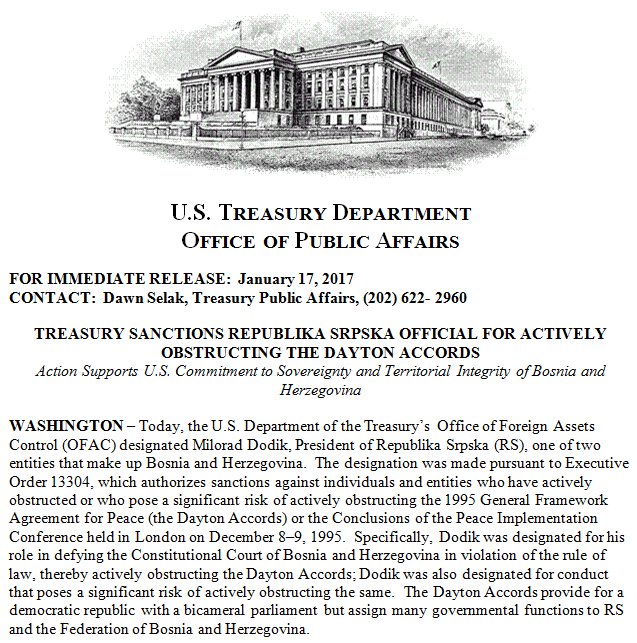 January 18, 2017 – Washington, D.C. – The Advisory Council for Bosnia and Herzegovina (ACBH) applauds the United States government for enacting financial sanctions against Milorad Dodik, President of Bosnia and Herzegovina’s (BiH) entity Republika Srpska (RS). In a press release issued on January 17th, the U.S. Department of the Treasury stated that the designation was made pursuant to Executive Order 13304, which was signed by President George W. Bush in 2003, and which authorizes sanctions against individuals and entities who have actively obstructed, or who pose a significant risk of actively obstructing the Dayton Peace Accords.

“ACBH has long advocated for the sanctioning of Milorad Dodik and we are thankful to the U.S. Department of State, U.S. Department of the Treasury and all relevant U.S. government agencies on their leadership and for their unwavering and longstanding support of BiH’s sovereignty and territorial integrity,” stated ACBH President, Mirzeta Hadzikadic.

The sanctions against Mr. Dodik were enacted after a series of aggressive moves that fundamentally violated the 1995 General Framework Agreement for Peace, otherwise known as the Dayton Accords, which brought the 1992-1995 war of aggression against BiH to an end and became the basis for  the country’s constitution. Despite multiple warnings by the United States and the international community, the authorities in Republika Srpska blatantly disregarded the Constitutional Court of BiH by holding an illegal referendum on September 25, 2016. The referendum specifically defied the court’s ruling  that the Bosnian Serbs’ celebration of January 9th as the “National Day of Republika Srpska” was unconstitutional because it discriminates against the non-Serb residents of the RS.

“The response by the United States government to Milorad Dodik’s reckless and dangerous acts is a signal to obstructionist politicians in BiH, and sends a loud and clear message to the entire Southeast Europe region that no one is above the law,” stated ACBH Executive Director, Ajla Delkic.

ACBH would like to remind friends of BiH that:

1). Republika Srpska is an entity of BiH and comprises 49% of BiH’s territory. It is not a sovereign nation-state nor is it an actual Republic. Bosnia and Herzegovina is comprised of two entities – the Federation and Republika Srpska. Together, the two entities make up the sovereign nation of Bosnia and Herzegovina with the capital city being Sarajevo.
2). Republika Srpska was officially recognized into existence through the signing of the Dayton Peace Accords in Paris, France on December 14, 1995 – not on January 9, 1992.
3). Republika Srpska is a direct product of violent ethnic cleansing and genocide, and its political leadership has exhausted a considerable amount of taxpayer money on the denial of genocide of its non-Serb population. During the war of aggression against Bosnia and Herzegovina, the Serb forces ethnically cleansed the overwhelming majority of the non-Serb population from what is now Republika Srpska at the command of Radovan Karadzic – former President of Republika Srpska. On March 24, 2016, the International Criminal Tribunal for the former Yugoslavia convicted Karadzic of genocide and crimes against humanity against BiH’s non-Serb civilians. Further, the United States House of Representatives unanimously passed House Resolution 199 and House Resolution 310 affirming “the aggression and ethnic cleansing committed by Serb forces in Bosnia and Herzegovina meet the terms defining genocide according to the 1949 Genocide Convention.”