Ambassador Valentin Inzko speaks at the U. S. Institute of Peace 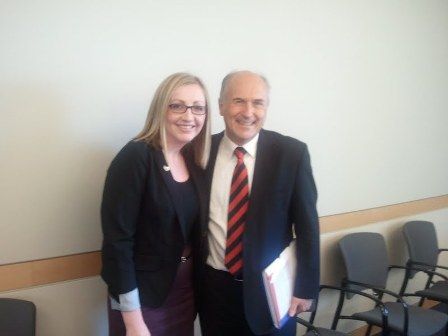 On May 10, 2011, BAACBH President, Mr. Admir Serifovic, and Executive Director, Ms. Ajla Delkic, attended an event at the United States Institute of Peace featuring the High Representative to BiH, Ambassador Valentin Inzko. During his speech, Mr. Inzko highlighted the challenges BiH faces today as well as noting positive developments that have come out of BiH in the last couple of years. Today, seven months after the election, BiH has yet to form a state government. Furthemore, the Dayton Peace Accords are in jeopardy because in recent weeks, the President of Republika Srpska (RS), Mr. Milorad Dodik had issued series of threats by requesting a referendum in the RS which calls into question the validity of the Court of BiH, the Prosecutor's Office of BiH as well as the past decisions by the Office of the High Representative. This is a clear threat to the Dayton Peace Accords and is in no way supported by the international community. Mr. Inzko stated that this is the most serious crisis since the war.

On a positive note, Mr. Inzko highlighted the accomplishments that have come out of BiH in recent years. Today, the two entities of BiH have a common passport, a common flag, a national anthem, state border police, coat of arms and a common single ministry of defense. Mr. Inzko praised BiH on the political will to fulfill the 174 conditions for visa liberalization and for accomplishing this goal in a professional manner. BAACBH in its question at the event brought Mr. Inzko's attention to the recent events that took place in Prijedor regarding the "Day of Concentration Camp Survivors" which takes place on May 9th of each year at the former Omarska concentration camp site. On May 9, 2011, the authorities in Republika Srpska did not allow survivors of this concentration camp to visit the site and honor those who were killed in 1992. Mr. Inzko is aware of the situation, expressed concern about this issue, and believes that reconciliation is vital and possible but that it is a continuous process.