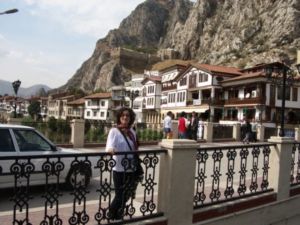 The historic richness of beauty and heritage of the Golden Horn region encompasses a country of hope and prosperity, that of the Republic of Turkey. From Sept. 21st to Sept.30th 2008, BAACBH Executive Director Ms. Elmina Kulasic was cordially invited by our partner organization, the Turkish Cultural Foundation, to a Cultural Tour of Turkey. She was honored to attend and was in awe of the experience.

The flow of cultures from the Hittites period to the Ottoman Empire emphasized a spectacular view of a setting where its location is a magnificent mile between two regions; one part reaching out to Asia and the other to Europe. The picturesque portrayal of ancient homes, commercial trading centers, textile and carpet industry, as well as local delicacies prove that Turkey is a destination not only for a vacation but cultural exchange. Ms. Kulasic highly recommends her colleagues and constituents to partake in such an opportunity should it be allowed to them.