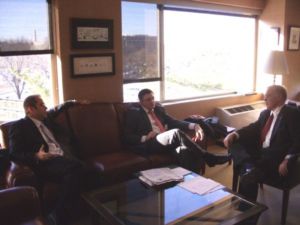 BAACBH members used the opportunity to thank Governor Dean for his assistance to the Bosnian community in the United States while governor of Vermont as well as in his current position with the Democratic National Committee.

Among issues discussed was the possibility of active participation by the Bosnian-American community in US public and political life and general integration into American society. Governor Dean shared the positive experiences he has had with the Bosnian community in Vermont and expressed a desire for similar relations with other local communities around the US.

In discussing global geopolitical events, the meeting participants highlighted the special "bridging" role of Bosniaks as authentic European Muslims. The participants agreed that the friendship between the US and Bosnia and Herzegovina is a sound one and is based on shared culture and interests. Participants also discusses the resolution of Kosovo's status in relation to regional stability and the need for a continuation of reforms in Bosnia and Herzegovina.

At the end of the meeting, Governor Dean expressed his hope that close cooperation on the above mentioned issues would continue. Furthermore, he suggested that consultations on social and political issues in Bosnia and Herzegovina and their relation to the integration of the Bosnian diaspora into American society be a regular occurrence.