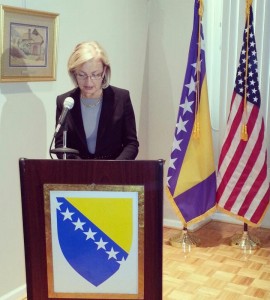 This year, Bosnia and Herzegovina (BiH) also celebrated its ten year partnership with the Maryland National Guard. Established in 2003, the program promotes civil and military cooperation and has enabled BiH to go from a consumer of security to a producer of security. Currently, members of the BiH Armed Forces are participating in the NATO-led mission to Afghanistan as well as the U.N. Organization Stabilization Mission in the Democratic Republic of the Congo. In April 2010, the NATO Alliance invited BiH to join the NATO Membership Action Plan (MAP), however, there is only one hurdle blocking BiH in commencing MAP – the registration of immovable military property with the BiH Ministry of Defense.

Given the current political situation and economic climate in BiH, NATO membership should be a priority and ACBH urges all the necessary actors to immediately resolve the defense property issue. The benefits of NATO membership include more than just security benefits and collective defense but also economic prosperity, disaster relief, humanitarian aid, and scientific collaboration through the NATO Science for Peace and Security Program.