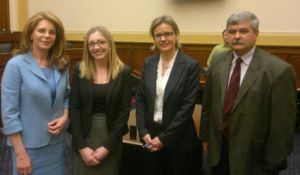 Amor Masovic, Chairman of the Board of Directors of the Missing Persons Institute of Bosnia and Herzegovina testified alongside Her Majesty, Queen Noor of Jordan, Commissioner of the International Commission on Missing Persons (ICMP); Mr. Shawn A. Bray, Deputy Director, INTERPOL Washington; and Ms. Fatima Tlisova,Writer/Editor/Producer, Voice of America.

For the past twenty years, Mr. Masovic has been working on identifying, finding and registering missing persons who disappeared as a result of the war in Bosnia. Since 1992, his team located over 500 mass graves and over 5,000 individual graves that were filled with over 16,000 human bodies. According to Mr. Masovic's statement, as a result of the genocide in Bosnia and Herzegovina (BiH), it has been documented that approximated 300,000 people disappeared in BiH. The majority of the victims were civilians and only a small percentage were members of the military.

BiH continues to face many obstacles in giving these victims and their family members justice due to the fact that international prosecutors and judges working within local judicial institutions suffer relentless attacks and pressure from certain BiH politicians who negate genocide. This behavior perpetuates divisions between Bosnian citizens and prevents reconciliation by negating the past. It is imperative that the Institute for Missing Persons is properly funded and that the government of Bosnia implements recommendations made by the Working Group on Enforced and Involuntary Disappearances (WGEID) in order to accelerate the process of exhuming and identifying victims using the "Bosnian Model," a mechanism for solving missing cases for which BiH has been internationally recognized.

Her Majesty, Queen Noor of Jordan has worked on missing persons issues within Bosnia in her capacity as the Chairman of the ICMP. "In most of the world today family members have no legal recourse through which they can demand answers and those who may be brave enough to ask, fear reprisals from authorities which were, in many cases, are responsible for the disappearance in the first place" said Her Majesty Queen Noor, adding that an unprecedented achievement was made in the Western Balkans where more than 70% of the 40,000 missing persons have been identified, thanks to organizations such as the ICMP.

The ICMP is currently headquartered in Sarajevo. In addition to its work in the countries of former Yugoslavia, ICMP is now actively involved in helping governments and other institutions in various parts of the world address social and political issues related to missing persons and works to establish effective identification systems that can be used to identify persons that go missing due to conflicts or natural disasters.