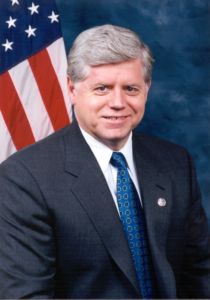 January 20, 2012 – Washington, D.C. – The Advisory Council for Bosnia and Herzegovina (ACBH) is pleased to announce that Congressman John Larson, Chairman of the House Democratic Caucus in the United States House of Representatives – the fourth highest ranking position among House Democrats, has joined the Congressional Caucus on Bosnia (Bosnian Caucus). Congressman Larson is the U.S. Representative for Connecticut's 1st congressional district, serving since 1999.

As the voice for Bosnian-Americans, ACBH looks forward to working with all Bosnian Caucus members in furthering its work on U.S. – Bosnia relations. We encourage all Bosnian-Americans to contact their members of Congress and ask them to join the bipartisan Congressional Caucus on Bosnia.

Please consider making a donation in support of our important work on behalf of Bosnian-Americans and BiH.

ACBH is an independent, non-profit organization dedicated to advancing the interests of Bosnian-Americans and works to improve relations between the United States and BiH. ACBH advocates for a democratic, multiethnic, and indivisible BiH with a primary goal of advancing the integration of BiH into the EU and NATO.