January 27, 2012 – Washington, D.C. – The Advisory Council for Bosnia and Herzegovina (ACBH) is pleased to announce that Congresswoman Donna Edwards has joined the Congressional Caucus on Bosnia (Bosnian Caucus). Congresswoman Edwards is the U.S. Representative for Maryland’s 4th congressional district, serving since 2008.

“ACBH is honored to have Congresswoman Edwards as a member of the Bosnian Caucus. She is very interested in issues related to BiH and the 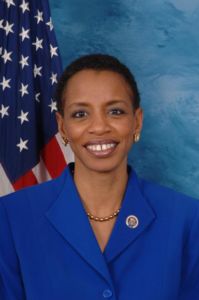 role that the U.S. plays in the Balkan region. In addition, she was particularly pleased with Bosnian Women’s Day – an event ACBH organizes on Capitol Hill each year. Women’s issues are close to Congresswoman Edwards’ heart; she co-founded the National Network to End Domestic Violence, an advocacy support group for battered women and has worked to pass the Violence Against Women Act of 1994. We welcome her support for a democratic, multiethnic and indivisible BiH and are highly encouraged by her joining the Bosnian Caucus, increasing the Caucus to 28 members” said ACBH Vice President, Adna Karamehic-Oates.

As the voice for Bosnian-Americans, ACBH looks forward to working with all Bosnian Caucus members in furthering its work on U.S. – Bosnia relations. We encourage all Bosnian-Americans to contact their members of Congress and ask them to join the bipartisan Congressional Caucus on Bosnia.

Please consider making a donation in support of our important work on behalf of Bosnian-Americans and BiH.

ACBH is an independent, non-profit organization dedicated to advancing the interests of Bosnian-Americans and works to improve relations between the United States and BiH. ACBH advocates for a democratic, multiethnic, and indivisible BiH with a primary goal of advancing the integration of BiH into the EU and NATO.