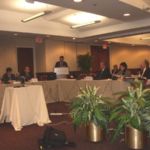 On October 2nd , 2008, the Center For Strategic & International Studies’ New European Democracies Project and the Foundation for Democracy, Culture and Liberty, Romania co-hosted a conference titled “New Allies and the New U. S. Administration: Priorities for CEE-U.S. Relations.” The Bosniak-American Advisory Council for BiH was one of the co-sponsors of the event along with other organizations representing European diaspora communities, the Hungarian American Coalition, the United Macedonian Diaspora, the American Polish Forum, American Friends of the Czech Republic, the Lithuanian American Community, and the National Albanian American Council, just to name a few.

With the US presidential election coming up, the purpose of the conference was “to examine the strategic relationship between the United States and the Central and East European States (CEE) to generate concrete policy recommendations for the incoming United States administration.” Representatives of the two US presidential candidates spoke at the event, as did several diaspora leaders, regional experts, analysts, business representatives and the media.

BAACBH’s representative at the event was Executive Director Elmina Kulasic, who contributed to the dialogue and promoted positive relations with allies in the Balkan region.