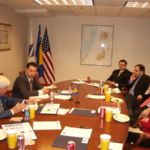 In discussing the importance of continuing the U.S. role in Bosnia and Herzegovina, Dr. Schwarz-Schilling encouraged BAACBH to persist in advocating for the active involvement of the United States in the region. Moreover, the participants agreed that there is a continued need for the presence of the international community in Bosnia and Herzegovina through the Office of the High Representative and its “Bonn powers.”

In discussion of other issues, BAACBH representatives expressed their dissatisfaction that the Law on Citizenship Bosnia and Herzegovina, especially Article 17 of this Law, has not yet been amended in order to allow for dual citizenship. BAACBH asked for Dr. Schwarz-Schilling’s assistance with this matter.

At the conclusion of the meeting, the hosts thanked Dr. Schwarz-Schilling for his visit to the BAACBH office and presented him with the book “A Centennial of Bosniaks in America.”