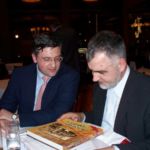 On March 24, Mufti Husejn Kavazovic of Bosnia and Herzegovina visited New York City as a part of a week-long working visit to the United States and Cornell University.

BAACBH in NY hosted a dinner event in honor of Mufti Kavazovic’s visit to America celebrating his two decade long contribution to the dignified and determined struggle for survival and revival of Bosniaks in Bosnia and Herzegovina as part of a multi-ethnic society. Representative members of Bosniak communities in NY attended the event.

Haris Hromic, Director of Foreign Affairs for BAACBH, welcomed the Mufti to the United States and expressed appreciation for his commitment to spreading tolerance and positive engagement both in Bosnia and United States.

Mr. Hromic informed the Mufti that the 350,000-strong Bosniak Diaspora in the United States values his openness and support and remains ready to stand together on issues of mutual interest. Mufti Kavazovic offered his vision of the current state of affairs in Bosnia and Herzegovina. The dialogue reflected on the proud centennial history of Bosniaks in America and pointed out pressing issues of our times. Mr. Hromic informed Mufti Kavzovic of the work and accomplishments of BAACBH in United States and Bosnia and shared some of the insights on how to improve effectiveness of BAACBH’s overall engagement in the promising years before us.

The Cornell University visit was organized by Thomas O’Toole of the Cornell Institute for Public Affairs, www.cipa.cornell.edu and Christopher Bragdon, Executive Director of the non-profit organization “BILD” – Bosnia Initiatives for Local Development: www.bild-bih.org.

Mr. Bragdon said that as a European Muslim, Mufti Kavazovic bridges many cultures. “Mufti Kavazovic has a range of experiences pursuing peaceful co-existence and reconciliation in a post-genocidal society,” Mr. Bragdon further pointed out that added significance of this visit stems from the fact that Kavazovic worked with diplomats, soldiers and citizens from both Middle Eastern countries and the United States in addition to his Bosnia experience.

Mufti Kavazovic’s featured presentation at Cornell title “The Path to Reconciliation and Peaceful Co-existence in a Post-Genocidal Society” testified towards the experiences during and since the war in Bosnia especially in regard to helping people return to their pre-war homes and establishing lasting peace with their neighbors.

Before departing back to Bosnia, Mufti Kavazovic spoke to cadets for Cornell R.O.T.C. about how US Army chaplains established good relations with leaders of the Islamic Society in Tuzla. Presentation was geared toward cadets who are about to join the military at a time when there is a pressing need for better understanding between the US military and those of Muslim culture. Mufti Kavazovic and the cadets discussed the lessons learned from the US military’s successful engagement in Bosnia and how that could serve as a model for future peacekeeping operations.

At the request of the leaders of the Muslim community of Cornell University, Mufti Kavazovic gave the sermon at Friday Prayers and lead a discussion afterwards addressing issues of Islam in a multi-ethnic secular democratic society.

Finally, in the spirit and deed of global interdependence, Mufti Kavazovic attended two religious services on Sunday, one at the Epiphany Episcopal Church and the other at Quaker Services.

Mufti Kavazovic returned to his duties in Bosnia the following Monday.