Roundtable held in US Congress “Bosnia: The Next Phase in Euro-Atlantic Integration” 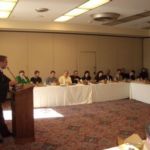 On January 31st, 2008, Bosniak American Advisory Council for Bosnia and Herzegovina (BAACBH) co-organized with the Congressional Caucus on Bosnia a roundtable luncheon with staffers and friends of the Caucus. The luncheon was titled “Bosnia: The Next Phase in Euro-Atlantic Integration” and was attended by over 25 Congressional staff members. This was the first such event since the initiation of the Congressional Caucus on Bosnia, and BAACBH will now make it a bi-annual event in order to keep Congress up to date with developments in Bosnia and Herzegovina.

Adna Karamehic, BAACBH’s director of communications, opened the luncheon by thanking the offices of Congressmen Russ Carnahan of Missouri and Chris Smith of New Jersey, the Co-Chairs of the Caucus, for their assistance in organizing the luncheon. She briefly introduced BAACBH and explained that it was created to advocate on behalf of the more than 350,000 Bosnian Americans in the United States. She also made a few comments on US Congress’ previous involvement in Bosnian issues, highlighting its support for House Resolution 199 and Senate Resolution 134 on the Srebrenica genocide. Other members of BAACBH that were present at the luncheon were members of the Board of Directors.

Jeremy Haldeman and Mark Milosch, staff members from the offices of Congressmen Carnahan and Smith then took to the podium to make their remarks. Both described their positive experiences in working with the Bosnian community in the United States.

Following these remarks, BAACBH vice-president Tarik Bilalbegovic spoke about the need for continued reforms in Bosnia and Herzegovina if the country is to join Euro-Atlantic structures such as the European Union and NATO. In this vein he informed Congressional staffers about a new resolution currently in process in Congress, House Resolution 679, which calls for democratic constitutional reform in Bosnia and Herzegovina.

Congressional staffers had many interesting questions on various issues, including police reform, disarmament, ethnic tensions and EU integration, which BAACBH members addressed. The presence and comments of Bob Hand, a staff advisor at the US Helsinki Commission who has worked on Balkan and Bosnian issues since the early 1990s, were extremely helpful and valuable in the question and answer session.