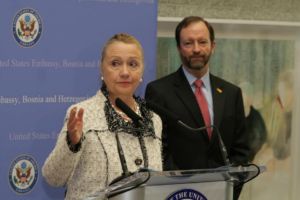 November 1, 2012 – Washington, D.C. – U.S. Secretary of State, Hillary Rodham Clinton visited Bosnia and Herzegovina (BiH) on October 30, 2012, in a joint effort with EU diplomats including Catherine Ashton, the High Representative of the Union for Foreign Affairs and Security Policy. Secretary Clinton urged BiH's political leaders to put aside their differences and complete the necessary reforms to join NATO and the EU or suffer the consequences of  being left behind. In regards to NATO membership, she assured the leaders of BiH that if they implement the reforms by November, she will personally speak to NATO Ministers in December in order to make BiH part of NATO's Membership Action Plan.

The U.S. officials have been gravely disappointed in BiH leaders for their unrelenting promotion of narrow, ethnic, personal or party agendas over the interests of the country as a whole. Secretary Clinton was most critical of the position taken by the Serbs stating that "it is totally unacceptable that 17 years after the war ended, some still question Bosnia and Herzegovina's sovereignty and territorial integrity. Such talk is a distraction from the problems facing the country and serves only to undermine the goal of European integration. The Dayton accords must be respected and preserved, period." During her trip to BiH, Secretary Clinton met with the members of the Presidency of BiH and other political leaders.

ACBH praises Secretary Clinton for making BiH the first stop of her Balkan tour and for reiterating the strong U.S. support for a multiethnic, democratic and sovereign BiH. Her visit to BiH is a clear sign of American interest in not only BiH but the entire Southeast Europe region and ACBH strongly urges BiH political leaders to make the necessary reforms immediately so that BiH can move forward and towards Euro-Atlantic integration.