The Congress of North American Bosniaks 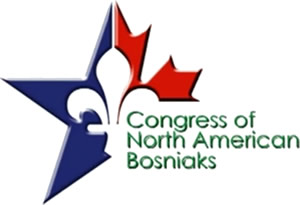 The Congress of North American Bosniaks (www.bosniak.org) is very pleased to announce that on June 22, 2005, the United States Senate passed a resolution (S. Res. 134 sponsored by Senator Gordon Smith and Senator Joseph Biden) commemorating ten years of Srebrenica massacre. The resolution was agreed to in the Senate without amendments and by unanimous consent regarding this human rights issue.

The resolution is a bipartisan measure commemorating July 11, 1995-2005, the tenth anniversary of the Srebrenica massacre in which more than 8,000 men and boys were meticulously and methodically separated from their daughters, mothers, sisters and wives and then killed by Serb forces, buried in mass graves and then re-interred in secondary graves to cover up the crimes. Srebrenica fell to invading Serb forces on July 11, 1995 and at the time had been declared a UN “safe area” under the protection of the international community. The Srebrenica massacre was the worst genocidal atrocity in Europe since World War II.

The resolution states that “the policies of aggression and ethnic cleansing as implemented by Serb forces in Bosnia and Herzegovina from 1992 and 1995 meet the terms defining the crime of genocide in Article 2 of the Convention on the Prevention and Punishment of the Crime of Genocide, created in Paris on December 9, 1948, and entered into force on January 12, 1951.” In addition, the resolution further states that “the policies of aggression and ethnic cleansing pursued by Bosnian Serb forces with the direct support of authorities in the Federal Republic of Yugoslavia (Serbia and Montenegro) ultimately led to the displacement of more than 2,000,000 people, and an estimated 200,000 were killed.”

It calls on all entities of the former Yugoslavia, as well as the international community, to immediately arrest and turn over to the International Criminal Tribunal for the former Yugoslavia in the Hague all indicted war criminals in the region and condemns the fact that the war criminals responsible for Srebrenica, notably Radovan Karadzic and Ratko Mladic, are still at large ten years after the slaughter.

The United States Senate stood tall and denounced those groups who did not respect or abide by basic human rights principles fundamental to United States citizens, and to all citizens of the world. This somber remembrance of the tragic events of 1995 should help the people of Bosnia and Herzegovina move forward, and reiterate the United States’ influential position on
the value of life and liberty.

The House version of the resolution (H. Res. 199) is expected to pass the United States House of Representatives on Monday, June 27, 2005.

The Congress of North American Bosniaks would like to thank all the Senators and their staffers for their hard work regarding this resolution.

Special gratitude goes to the Bosniak and Bosnian-Americans, and to all friends of Bosnia who took the time to support this resolution.