Short Film Screening: In The Name of the Son 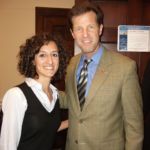 Embracing the future through art after surviving the war in Bosnia

“It was the first short action film in history to be screened on Capitol Hill,” said Harun Mehmedinovic, writer and director of In the Name of the Son, with the presence and honor of Hon. Congressman Russ Carnahan from Missouri, a devoted friend of Bosnia and its Bosnian-American constituents in St. Louise”.

The Bosniak-American Advisory Council for Bosnia and Herzegovina, with the support from the Heinrich Boell Foundation and Georgetown University Human Rights Forum, was able to organize the film screening of In the Name of the Son on Sept. 18th and Sept. 19th. The film screening event emphasized the impact of the Bosnian war and how Bosnian Americans, especially the young generation, is coping with it and transforming it into a form of art that will not only enable them to look back at their childhood experiences, but into a better and more peaceful future. It is an attempt to educate the Capitol Hill community and their staffers about post-war life and how despite bloodshed young Bosnian-Americans are understanding their past and embracing their future. In addition, at the film screening the Srebrenica Memorial Quilt project was displayed to enable the Capitol Hill community to understand local efforts in Bosnia to bring stability and peace through art work.