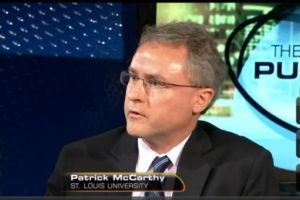 On April 3 2012, ACBH Director of Development Mr. Patrick McCarthy was interviewed by a local St. Louis TV station called "The Pulse" about the thousands of Bosnians who fled their war torn country, many of whom settled in St. Louis. Today, more than 70,000 Bosnians call St. Louis home; it is the largest Bosnian population outside Bosnia.

Mr. McCarthy talked about how the citizens of St. Louis felt an obligation to help Bosnian refugees who were coming to the United States not by choice but out of necessity. He mentioned how Sarajevo, a city of 600,000 people came under attack by the Yugoslav National Army – the fourth largest in Europe. The army had fighter jets, tanks and artillery against an unarmed civilian population. At the time, aid workers called this the world's largest concentration camp. The atrocities in Bosnia were happening in Europe after the world pledged "never again" and the residents of St. Louis felt responsible to help. They began to protest against their own government's inaction. The Clinton administration initially portrayed what was happening in Bosnia as a consequence of ancient ethnic hatreds, which was far from the truth. One of the special things about Bosnia was its tradition of people living together in peace for many years.

Mr. McCarthy mentioned that while it's important that the entire Serbian people not be tarnished for the actions of their political and military leadership, justice must be established and there must be a clear record of what occurred in Bosnia. Dr. Benjamin Moore, Associate Professor of English at Fontbonne University in St. Louis, is the director of the "Bosnian Memory Project" which aims to preserve stories of the Bosnian genocide. The exhibits allows students and visitors to learn more about what happened in Bosnia and serves to preserve the memory of these tragic events in human history.

Since April 2012 marks 20 years since the war in Bosnia, a series of programs are scheduled throughout the year in the St. Louis area. Below are details regarding the first five events, which will take place during the first three weeks of April; these events center on the exhibit "Survival in Sarajevo: Jews, Muslims, Serbs, And Croats Working Together During the Bosnian War 1992-1995." This exhibit was developed by Centropa and is co-sponsored by Fontbonne University's Bosnia Memory Project, the Holocaust Museum and Learning Center, the University of Missouri-St. Louis, the St. Louis Rabbinical Association, the Congregation Neve Shalom, The Bosnian Chamber of Commerce, Sabah Newspaper, and KETC Channel 9.

To view the times and dates for the exhibit please click here.