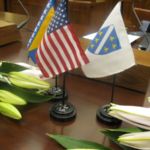 On July 11, 1995, the Bosnian town of Srebrenica, a declared United Nations safe haven, fell to Serb paramilitary forces led by General Ratko Mladic, an indicted war criminal who is still at large. The fall of Srebrenica marks the final act of brutal ethnic cleansing and genocide in BiH, when more than 8,000 Bosniak (Bosnian Muslim) men and boys were slaughtered within a five day period. The systematic killings were not only part of the vicious campaign to eliminate the Bosniak population in the name of radical Serb nationalism, but also to eliminate the historical pattern of tolerance and shared experiences that characterized life in BiH.

Today, 14 years after the Srebrenica Genocide, the worst atrocity committed in Europe since the end of the Second World War, we are reminded that we are the voice for the countless victims and advocates for genocide prevention around the world. As the surviving relatives, neighbors and hundreds of diplomats and members of the international community gather to commemorate the Srebrenica Genocide, let us not forget that justice must prevail. Furthermore, let us be reminded that justice is the only path towards a democratic, prosperous and stable BiH, as well as Southeast Europe.

The 14th commemoration of the Srebrenica Genocide is a dark reminder that the world failed to protect innocent civilians. BAACBH, as an independent non-governmental organization advocating on behalf of Bosnian-Americans, is committed to preserving the memory of those who suffered and to disseminating knowledge about BiH and the tragedy that took place as the world watched.