The Rise of Civil Society in BiH 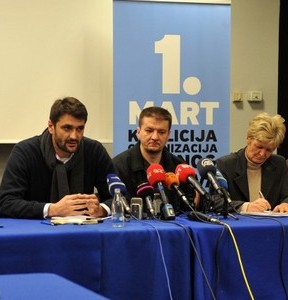 On December 18, 2012, more than 30 nongovernmental organizations in BiH joined the civil society led initiative "Prvi Mart/March First" that aims to register over 100,000 BiH citizens to vote in the 2014 general elections.

The civil society initiative was started by Emir Suljagic, founder of the successful "I Will Vote for Srebrenica" campaign. Mr. Suljagic believes that this is an excellent nonviolent way to bring about changes to the human rights abuses, negation of genocide and overall negative rhetoric and policies of Republika Srpska (RS).
"If 100,000 additional voters cast their vote for us, then we will have five representatives in the House of Representatives of BiH. Our aim is not to abolish the RS because the RS is not our enemy. Milorad Dodik and Rajko Vasic are the enemies of the entity. We simply want to stop being held hostage by those who still argue that genocide did not take place." stated Suljagic.
ACBH strongly supports the goals of the "March First" initiative and looks forward to working with Mr. Suljagic and all of those who advocate for a BiH that is united, multiethnic and democratic.
Previous post
Next post