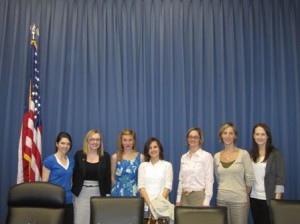 The Third Annual Bosnian Women's Day on Capitol Hill was held last month in Rayburn House Office Building thanks to the support of the Congressional Caucus on Bosnia member Congresswoman Eddie Bernice Johnson (D-TX), her staff, and the generous financial contribution of the Heinrich Böll Stiftung North America. The event featured an award winning Bosnian-American filmmaker, Ms. Sabina Vajraca, who spoke about her documentary "Back to Bosnia." Ms. Nafees Syed, Congresswoman Johnson's legislative aide and the head of the Congresswoman's "Women's Peace Initiative" spoke about Congresswoman Johnson's first visit to Bosnia and how it inspired her to start the "Women's Peace Initiative" which strives to bring greater visibility to women who are victims of war and aggression, as well as to those that facilitate peacemaking, peacekeeping and peace-building activities in their communities.

The Executive Director of BAACBH, Ms. Ajla Delkic, spoke on the importance of Bosnian Women's Day and how we must continue to highlight all of the brave and courageous women all around the world who are working tirelessly to better society. Lastly, Ms. Delkic stressed the importance of honoring all Bosnian women who are working hard to rebuild their communities despite the obstacles they face.

Ms. Vajraca shared her award winning documentary "Back to Bosnia" which focuses on her own family who returns to Bosnia in order to reclaim their property after being forced out from their home during the war that lasted from 1992-1995. While there, they were confronted with the destruction of their city's multiethnic character and forced to examine the community they left behind. They witness an exhumation, visit the sites of war crimes, and seek out the remnants of a city that was once their home, as well as confront those that forced them out.

The documentary touches on a present day issue that is still relevant in Bosnia due to the fact that many homes that are returned to the families that were forced out are left in horrible conditions. Furthermore, there are still many families whose homes have not been returned and many are still afraid to go back.

The event coincided with Genocide Prevention Month which strives to bring about awareness and an end to genocide worldwide.