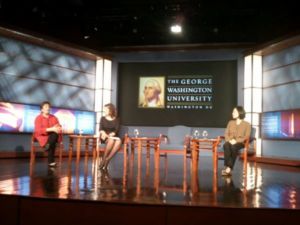 BAACBH Executive Director, Ms. Ajla Delkic attended a town hall meeting hosted by the Elliott School of International Affairs at George Washington University that outlined the U.S. Department of State's "2011 Hours Against Hate Campaign" which officially launched at the Organization for Security and Cooperation in Europe in Vienna on Feb. 17.

The global campaign was started by Special Envoy to Monitor and Combat Anti-Semitism Hannah Rosenthal and Special Representative to Muslim Communities Farah Pandith in an effort to combat discrimination and hatred against Jews, Muslims and other ethnic groups. "This is about deeds, not just words," said Ms. Rosenthal. "The theory of the campaign is to encourage young people to pledge hours to serve and volunteer at an organization that serves people that don't look like you, pray like you and live like you."

Ms. Rosenthal is scheduled to visit BiH where she will talk about the campaign with BiH students and community activists. A campaign such as this one is a great tool for reconciliation because it allows individuals to spend time getting to know those that they deem different than themselves. It in turn creates more understanding, tolerance and builds stronger communities.

For more information about the campaign or how you can get involved please click on: http://www.state.gov/s/2011hoursagainsthate/