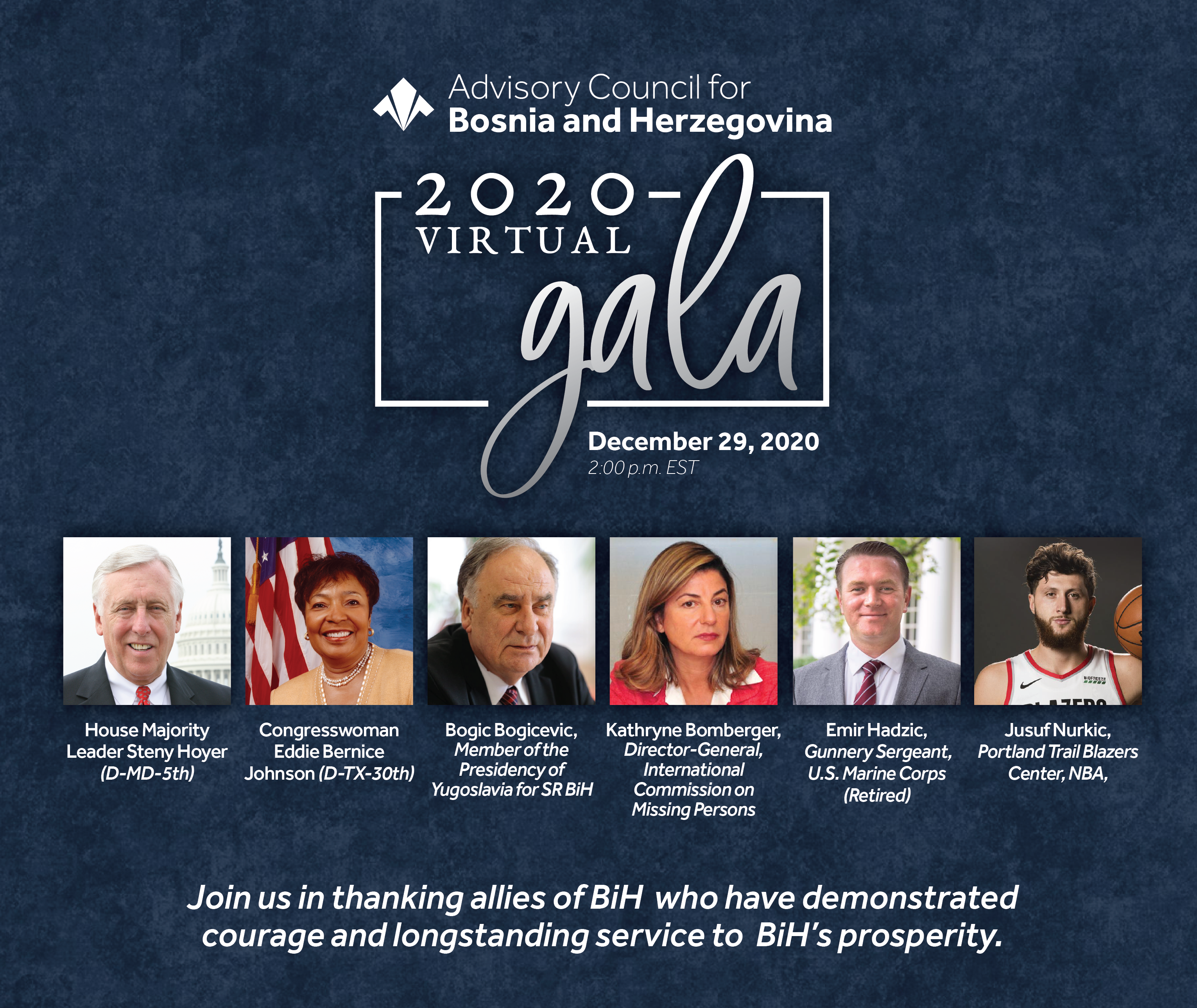 With a combined audience of over 20,000+ international affiliates through our website, mailing lists, and social media, ACBH cordially invites you to join us as an official sponsor and partner of our 2020 Gala.

REGISTER FOR THE 2020 VIRTUAL GALA

On December 29, 2020, the Advisory Council for Bosnia and Herzegovina (ACBH) will be hosting a virtual gala to honor long standing friends and supporters of a democratic Bosnia and Herzegovina (BiH). The year 2020 is an important year as it marks the 25th anniversary of the Srebrenica Genocide, as well as the 25th anniversary of the Dayton Peace Accords – a U.S.-brokered peace agreement that ended the war in BiH. In that spirit, ACBH plans to recognize individuals that have had an impact on BiH, and have worked to bring about peace and justice.

For over a decade, ACBH has been the most effective U.S. non-governmental organization promoting BiH, and the interests and needs of Bosnian Americans. It is through the support of our donors, partners and volunteers that ACBH has been able to strengthen and assert the Bosnian American advocacy in front of policymakers in Washington, D.C.

Being the first-ever Bosnian American organization to open an office in Washington, D.C., ACBH has provided the Bosnian American community a platform to engage in sophisticated and smart diplomacy. Throughout the years, ACBH has spearheaded many important causes, including the U.S. recognition of the genocide in Srebrenica through the passing of two resolutions in U.S. Congress. In addition, ACBH helped facilitate the formation of the first-ever Congressional Caucus on Bosnia in the U.S. Congress that works to strengthen BiH-U.S. relations. In order to bring our two countries closer, and highlight the needs and challenges facing BiH, ACBH executed three successful Congressional trips to BiH, organized over 100 events related to BiH, and aided in over $220,000 in humanitarian relief efforts to BiH. ACBH also provides scholarship opportunities for Bosnian Americans to intern on Capitol Hill, and works to counter genocide denial and revision of history through various educational programs.

To register for the gala, select a sponsorship opportunity and you will be contacted with instructions for how to join the online event.

As a registered 501(c)(3) non-profit, ACBH will provide donation receipts following the Gala for your sponsorship. Proceeds raised from the Gala will directly benefit the important work of our organization and will be used to strengthen the Bosnian American voice in Washington, D.C.

If paying by check, please make the check payable to “Advisory Council for Bosnia and Herzegovina” and have it be sent to the address below.

ACBH is a 501(c)(3) charitable organization; donation receipts will be issued for your sponsorship. Proceeds from the Gala will benefit ACBH’s advocacy and educational programs.

If you have any questions concerning your sponsorship benefits and/or our organization, please do not hesitate to contact us at gala@acbih.org.