“Global Security: Through a Bosnian Lens” 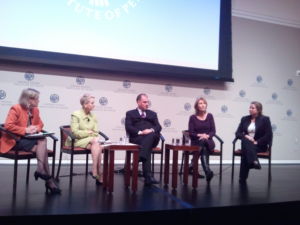 On Tuesday, October 25th, Executive Director Ajla Delkic and Intern Tyler Branscome attended a lecture at the United States Institute of Peace titled: "Global Security: Through a Bosnian Lens." The event focused on what we can learn about global security through the lessons learned from Bosnia, with a particular emphasis on the role of women in peacebuilding. The event included discussion from Ambassador Swanee Hunt and USAID's Deputy Administrator Donald Steinberg, as well as conversation with Ambassador Hunt about her new book titled "Worlds Apart," a text that takes the reader through Ambassador Hunt's 17 years of experience in the Balkans. The event also included a screening and discussion of the recently released PBS documentary called "I Came to Testify," directed by Pamela Hogan and produced by Abigail Disney as part of a PBS five-part special series titled "Women, War & Peace." The film is centered on 16 women from Foca, Bosnia, who broke the silence about the rapes that occurred in their town during the Bosnian War and testified at the International Criminal Tribunal for the Former Yugoslavia. The event was organized in collaboration with The Institute for Inclusive Security, Vital Voice, and USAID.Carnahan USIP

Congressman Carnahan recently brought up his concerns over the stagnation of BiH reforms to Secretary of State Hillary Clinton at a recent hearing of the United States House of Representatives Committee on Foreign Affairs.