Looking Back at Bosnia – 20 Years Later 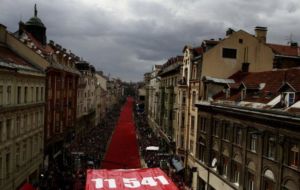 11, 541 red chairs have been lined up in rows on Sarajevo's main street today – one for every man, woman and child killed during the siege. The chairs hail from a factory in Serbia as confirmed by Sarajevo's Mayor, Alija Behman who stated that the factory guaranteed the shipment and the delivery of the chairs free of charge. Sarajevo is a city where Christianity, Islam and Judaism and its adherents have lived side by side for centuries, the city flourishing because of the multicultural mix of inhabitants. However on April 6, 1992, Serb forces of Republika Srpska and the Yugoslav People's Army besieged Sarajevo with a clear intent to destroy this multiethnic fabric and eliminate any resemblance of religious and cultural cohabitation. The siege of Sarajevo, the longest siege in modern day history, not only marked the start of this war of aggression, but also the beginning of genocide and ethnic cleansing throughout Bosnia and Herzegovina (BiH).

For 1, 425 days, the brave residents of Sarajevo lived without water, electricity, medicine, and with very little food. The once vibrant and beautiful city was under constant shelling by Serb forces that bombed the city from the surrounding hills. In 1994, the Washington Post reported on a young, wounded man waiting for care at Sarajevo's Kosevo Hospital. He described the city: "There are trucks of dead, there are legs, arms, heads – as many as you want." This was the gruesome everyday reality of Sarajevo's residents.

Bosnia and Herzegovina's challenges did not stop when the war ended and the road to peace has been and continues to be long and hard. The Dayton Accords halted the gunfire, but the society remains ethnically divided, devoid of justice for rape, camp, and genocide survivors, and without a strong political compass to guide the country in the coming years. Twenty years after the beginning of the war, corruption, hateful political rhetoric, and a weak economy eat away at the progress Bosnia and Herzegovina's citizens have made. 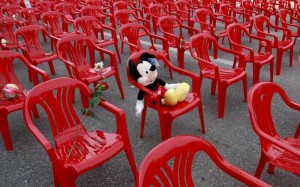 The human toll from the war is astounding and devastating: over 100,000 killed and over 2 million displaced. This is a somber day for citizens of BiH and for the Bosnian diaspora across the globe, however, this day challenges us all to remember the souls lost in the 1992-1995 war. In solidarity with April Genocide Prevention Month, ACBH is remembering all victims of genocide and honoring the survivors.

U.K.'s Prime Minister David Cameron stated that "As their city was smashed around them, the people of Sarajevo never gave in, never lost hope, never let their spirit be broken. Two decades later, Bosnia is looking to a brighter future, as the slow, painful work of recovery continues. Today is a day for the world to remember Sarajevo, to remember Bosnia and all those who lost their lives in that terrible conflict. A day to renew our commitment to stand by Bosnia until the recovery is complete, to support it in its path towards NATO and the EU, and to repeat that any unpicking of the Dayton agreement will not be tolerated."

ACBH strongly encourages the United States and the international community to re-commit its efforts in the campaign against genocide and to reengage in BiH so that similar atrocities never occur again.

To view a short video on the Siege of Sarajevo please click here.

The photos used in this article were taken by Bosnian American documentary photographer Dijana Mumunovic. You can find more of her work by visiting www.dijanaphoto.com.