The Second Annual Bosnia and Herzegovina Days on Capitol Hill 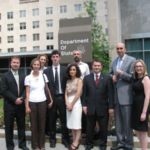 The Second Annual Bosnia and Herzegovina (BiH) Days on Capitol Hill was held from June 10 to June 11, 2010 in Washington, DC. The BiH Days on Capitol Hill is an annual gathering of Bosnian-American professionals who have dedicated their time to advocate for issues important to the Bosnian-American community, which numbers at approximately 350,000 constituents. It is a vibrant, self-motivated, and politically engaged community of American citizens oriented towards building mutual understanding between BiH and the United States. This year's participants came from diverse parts of the United States, including Florida, Michigan and Georgia, among others.

BiH Days on Capitol Hill were comprised of several important meetings, briefings, and events with policy and opinion makers. The visiting Bosnian-Americans first met with Lydia A. Borland, President of the Caspian Group and Consultant at The Livingston Group, LLC, who spoke about advocacy and the legislative process in Washington. On Capitol Hill, the participants met with the co-chairs of the Congressional Caucus on Bosnia, Congressman Russ Carnahan (D-MO) and Christopher Smith (R-NJ); staff of the U.S. Senate Committee on Foreign Relations; and had a working luncheon with a number of House of Representatives staff members. The day ended with a briefing at the U.S. Helsinki Commission, followed by a formal reception at the Embassy of Bosnia and Herzegovina, organized by Ambassador Mitar Kujundzic. The second day of the D.C. visit commenced with a visit to the U.S. Holocaust Memorial Museum where the participants paid tribute to the genocide victims and visited the Srebrenica permanent exhibition. The participants next met with the Deputy Assistant Secretary of State at the Bureau of European and Eurasian Affairs, Stuart Jones and his staff at the U.S. State Department where they had an engaging discussion about the U.S. and BiH relations. They also had a meeting with Daniel Serwer at the U.S. Institute of Peace, to discuss the role of the diaspora in U.S. foreign policy and the complexities of the constitutional reform process in BiH. Serwer is a former U.S. special envoy and coordinator for the Bosnian Federation, who mediated and negotiated the first agreement reached by the Dayton peace talks. At all the meetings, visiting Bosnian-Americans advocated for a continued strong relationship between the U.S. and BiH, and underlined the crucial importance of ensuring stability in Southeast Europe. Bosnian-Americans want a Bosnia and Herzegovina that is democratic, multi-ethnic, and indivisible, a member of both the European Union and NATO, in order to ensure that aggression and genocide against BiH and its citizens are never repeated again. Consequently, the participants commended House Resolution 1423, recently introduced by the Co-Chair of the Congressional Caucus on Bosnia, Congressman Christopher Smith, regarding the 15th anniversary of the Srebrenica Genocide. House Resolution 1423 commemorates the 15th anniversary of the genocide committed in the Bosnian city of Srebrenica in July 1995, and expresses support of the U.S. Congress for the designation of a Srebrenica Remembrance Day in the United States. In addition, participants emphasized the value of cross-cultural educational opportunities between the United States and BiH, and noted it as an issue worthy of further exploration by BAACBH.