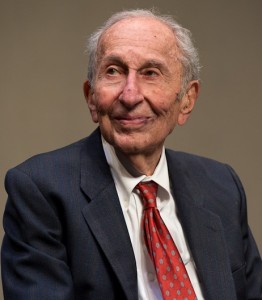 January 29, 2013 – Washington, D.C. – Revered U.S. diplomat, Ambassador Max M. Kampelman passed away on January 25, 2013 from congestive heart failure in his home in Washington. Ambassador Kampelman was born on November 7, 1920 in New York City to Jewish immigrants from Romania and became a champion of human rights and democracy throughout his many years as a public servant.

Perhaps best known for being the top U.S. government nuclear arms adviser during the Cold War era, Ambassador Kampelman also served as a member of the Steering Committee of the Washington-based Action Council for Peace in the Balkans that was committed to pursuing a more credible U.S. policy that would lead to a just and sustainable peace in the former Yugoslavia, and urged the U.S. Congress to support the Dole-Lieberman bill that aimed to terminate the U.S. arms embargo against the Bosnia and Herzegovina (BiH) government.

Ambassador Max Kampelman was a longstanding friend of BiH and ACBH remembers his commitment to the Southeast Europe region, and in his spirit, hopes that we can use this moment to work for lasting peace in BiH.