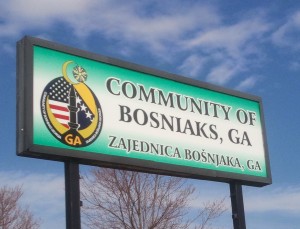 "The Atlanta community welcomed us with open arms and wholeheartedly supports the work of ACBH. Our mission is simple: a BiH that is united, multiethnic and part of the European Union and NATO. The well-organized event should serve as an example to other Bosnian American communities throughout the United States. On behalf of ACBH, we offer our sincerest gratitude and thanks to all of the Bosnian Americans who attended this event and donated to ACBH," said ACBH President, Mr. Admir Serifovic.

During the event, Mr. Serifovic participated in a roundtable discussion on Bosnian independence and spoke to about 500 members of the Bosnian American community on the importance of having a Bosnian American voice in Washington and asked all attendees to get involved in the American political process.

"We are looking forward to strengthening our Trustee ranks with the Atlanta representation because the metropolitan Atlanta area is one of the strategic stepping stones in the mosaic of national unity and its support for ACBH mission is vital. We are proud of their enthusiasm and recognition of ACBH's past efforts and we count on Bosnian American community in Georgia for a strong and committed support in years to come", said ACBH Chairman of the Board of Trustees, Mr. Haris Hromic.

In addition, both Mr. Serifovic and Ms. Delkic were able to reconnect with prominent Bosnian American community members from St. Louis, MO, Chicago, IL, Grand Rapids, MI, Charlotte, NC and Toronto, Canada. ACBH also received an award from Mr. Haris Alibasic, President of CNAB for our collaboration over the years.

"We look forward to visiting other Bosnian American communities throughout the United States and Canada in order to inform them about the importance of our work and what we have to offer to the diaspora community as a whole. The Atlanta community did a superb job in organizing this event. We were truly honored to have had a chance to participate" said ACBH Executive Director, Ajla Delkic.