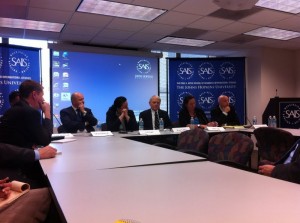 Ms. Brush started the conversation by stating that a foreign imposed solution on Bosnia and Herzegovina (BiH) will not work and that BiH needs to find its own solution. Furthermore, she stated that Serbia should work on forming ties with the whole of Bosnia, not just Republika Srpska. Lastly, Ms. Brush went on to cite the World Bank's finding that BiH is 160th on a list of 188 countries in terms of how easy it is to start a business. Mr. Selimovic, who is owner of the MIMS business conglomerate in BiH stated that even though the unemployment rate in BiH is currently very high – 42.9% – starting a business and creating jobs is difficult but not impossible.

Mr. Saracevic, a Bosnian-American entrepreneur based in Washington, D.C., concurred with the panelists about the vast human capital potential in BiH, adding that all of the development for the Internet companies he started in the U.S. was done by his employees in BiH. Thus, while BiH as a small country may never be able to compare itself to some of the world's biggest economies, it does have something to offer to the table. It has a vast energy sector as well as much potential in the fields of eco-tourism and organic food. With that in mind, Mr. Selimovic urged that BiH's main focus should be joining NATO and the EU, as making NATO membership a priority would give potential investors a sense of security.

Mr. Mantovanelli stressed that the status quo works well for political elites in BiH, so the capacities and resources that do exist are being undermined. The role of government is vital for economic development and a long absence of government does not send a good signal to potential investors. Ms. Cenic described BiH as a land of "crooks, fools and optimists. The crooks are ruling, fools are obeying and optimists believe something can be changed." She believes that the crooks are hoping that a small conflict will happen in BiH so that they will not have to pay for their mortgages or repay their loans. She warned that another small-scale conflict can easily erupt, and warned the West not to take its eyes off BiH. She believes that educating people in the rural areas of Bosnia about their human rights and the current economic situation is fundamental to solving the political stalemate in the country. Citizens are being led to believe that by aligning themselves with the political party that represents their ethnicity will ensure them with a job and a way to feed their family. Politicians are making a lot of promises but are in no hurry to deliver on those promises while Bosnia slips further and further into chaos.