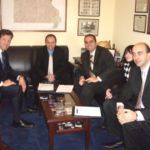 On 2 April 2008 representatives of BAACBH met with Congressman Russ Carnahan (D-MO.) Approximately 50,000 Bosnians – most of them refugees who fled the aggression on Bosnia and Herzegovina – live in the Congressman’s district. The meeting was a continuation of the close cooperation between Congressman Carnahan’s office and the Bosnian diaspora in the US.

In a relaxed atmosphere, BAACBH members informed the Congressman of the numerous activities the Bosnian and Herzegovinian diaspora is currently engaged in. The recent success in strengthening the Congressional Bosnian Caucus was discussed. Congressman Carnahan co-chairs the caucus, which has 27 members, including one senator. Progress on H.Res 679, which calls for constitutional reform in Bosnia and Herzegovina, was also discussed. BAACBH informed Congressman Carnahan that beginning in June 2008 the new main contact person for BAACBH in Washington will be Ms. Elmina Kulasic. Ms. Kulasic recently joined BAACBH as a full-time Executive Director. Congressman Carnahan also commended the recent $150,000 grant awarded to BAACBH by the Turkish Coalition of America (TCA), and expressed his support for the close cooperation between TCA and BAACBH.

Congressman Carnahan expressed some interest in a potential visit to Bosnia and Herzegovina this coming fall, and talked about the remarks he plans to make at the annual meeting of Bosniak Americans of North America, to be held on May 24 in St. Louis, Missouri. The Congressman also intends to address the US Congress to mark Bosnian and Herzegovinian independence day and the United States’ recognition of independence on April 7, 1992