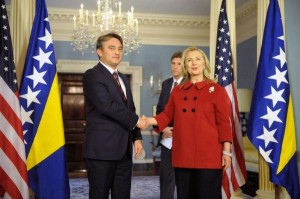 On December 13, 2011, the U.S. Secretary of State, Hillary Rodham Clinton, met with President of Bosnia and Herzegovina (BiH), Zeljko Komsic, in Washington, D.C.

In her opening remarks, Secretary Clinton stated that she was pleased to welcome President Komsic and that the United States is committed to a united, developed and prosperous BiH. In addition, she hopes to see more progress, prosperity, peace and opportunity within BiH in 2012.

President Komsic thanked Secretary Clinton for personally meeting with him and for her knowledge, understanding and friendship towards BiH. He went on to say that the ties between BiH and the U.S. are strong and important to BiH, and that BiH nurtures the friendship and solid foundation that it has with the United States. President Komsic thanked Secretary Clinton and the American people for stopping the war and for investing monetary and human capital into BiH in order to help it recover from the war in the 90's. Furthermore, Mr. Komsic noted that integration into NATO and the EU is of vital importance to BiH, and concluded that reforms within BiH that are in collaboration with the U.S. have proved to be the most successful.