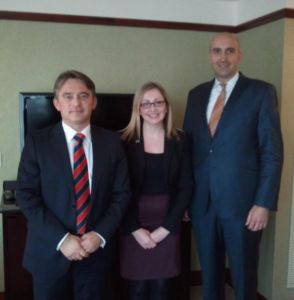 On December 13, 2011 the President of BAACBH, Mr. Admir Serifovic, and the Executive Director, Ms. Ajla Delkic, met with the President of Bosnia and Herzegovina (BiH), Mr. Zeljko Komsic. During the meeting BAACBH informed President Komsic of our advocacy efforts in Washington, D.C., and our plans for upcoming projects and activities in 2012. We discussed that one of the important priorities for BAACBH in 2012 is to assist in organizing a conference in Chicago prior to the NATO Summit in May of 2012 alongside other members of the Southeast Europe Coalition (SEC). The SEC is comprised of various diaspora leaders who are working towards helping their countries ascend into the European Union and NATO. BAACBH hopes that the conference prior to the Summit will bring attention of world leaders to Southeast Europe and help BiH's aspiration in joining NATO.

Furthermore, BAACBH informed President Komsic of our intention to host a policy conference in spring of 2012 in Washington, D.C., and invited him to attend as one of our esteemed guests. President Komsic expressed a strong desire to assist BAACBH in this effort and attend the event. President Komsic praised BAACBH's advocacy efforts over the past several years and our work in protecting and defending the sovereignty and territorial integrity of BiH in Washington. BAACBH representatives updated President Komsic on our outreach efforts and involvement with the Bosnian-American diaspora as well as our cooperation with non-governmental organizations and BiH government agencies.

Lastly, President Komsic concluded that BiH should work on enhancing ties with U.S. congressional representatives and hopes that BAACBH will be able to organize a future U.S. congressional delegation visit to BiH, similar to the successful visit we helped organize in 2009.