January 23, 2014 – Washington, D.C. – On January 9, 2014, the Serbian Institute (SI), a Washington, D.C.-based think tank whose goal is to be the voice of the Serbian people marked the National Day of Republika Srpska, Bosnia and Herzegovina’s smaller entity, in Chicago, Illinois. Among the notable individuals that joined SI were Mr. Marinko Avramovic, Counselor in the Consular Affairs Section at the Embassy of Bosnia and Herzegovina to the United States, Mr. Predrag Pecanac, Consul General of Bosnia and Herzegovina and Mr. Nebojsa Acimovic, Counsul General of the Republic of Serbia in Chicago, Illinois.

The event was broadcast via video that was posted on the Internet in which Danielle Sremac, President of SI, along with other speakers, spoke fondly of indicted war criminals Radovan Karadzic and Ratko Mladic who are currently on trial for genocide and crimes against humanity at the International Criminal Tribunal for the former Yugoslavia (ICTY) at The Hague. Sremac, who served as an official spokesperson of the Bosnian Serb leadership in Washington, D.C. during the 1992-1995 war of aggression against Bosnia and Herzegovina, stated that she was happy to hear that the audience remembers Karadzic and Mladic, as they are the people who created Republika Srpska. “I remember them in the cold mountains as I traveled to Jahorina and Pale, around the borders of Sarajevo and Srebrenica, and it was nicer and warmer for me during the war in Bosnia and Herzegovina than it was in Washington where there was another type of battle that was really harsh,” stated Sremac. What was even more appalling and disturbing was that the video from the event was continuously interspersed with images of the marauding Bosnian Serb forces and images of shelling of the city of Sarajevo and other places in Bosnia and Herzegovina. These images are offensive to the victims of the Bosnian war and to humanity.

ACBH in strongest terms deplores the continued idolization of indicted war criminals responsible for genocide and ethnic cleansing, by groups such as SI. Therefore, ACBH urges members of the U.S. Congress and the Obama Administration to take a firm stand against groups and organizations that operate in the United States and show no respect for the victims of the genocidal campaign waged by the military forces of Republika Srpska. It is important to note that Congressman Chris Smith (R-NJ), Co-Chair of the Congressional Caucus on Bosnia, and a longstanding friend of Bosnia and Herzegovina and Bosnian Americans introduced House Resolution 199 in 2005, which was unanimously passed in U.S. Congress, and which states that “the policies of aggression and ethnic cleansing as implemented by Serb forces in Bosnia and Herzegovina from 1992 to 1995 meet the terms defining the crime of genocide.”

The spread of ethno-nationalism does not pave way towards Euro-Atlantic integration and only perpetuates an atmosphere of fear and hate among various ethnic groups and enforces artificial separatism within Bosnia and Herzegovina. “We were alarmed to see a representative from the Embassy of Bosnia and Herzegovina as well as the Consul General at an event that glorifies war criminals. War criminals are not heroes. Lastly, the Serbian Institute allegedly aims to educate the public and promote a better understanding of the Balkan issues, yet is praising individuals who committed ethnic cleansing and genocide,” stated ACBH Vice President, Vehid Deumic. 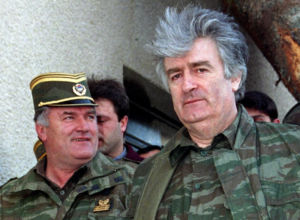 Since Bosnia and Herzegovina declared its independence from the Socialist Federal Republic of Yugoslavia in 1992, it has faced some of the greatest challenges seen in Europe since World War II. The war of aggression against Bosnia and Herzegovina left over 100,000 dead, over 2 million displaced and over 20,000 Bosniak Muslim women and girls raped. The Serb forces ethnically cleansed the overwhelming majority of the non-Serb population from Republika Srpska at the command of Radovan Karadzic – former President of Republika Srpska, head of the Serb Democratic Party (SDS), and the former Supreme Commander of the Bosnian Serb Army. In addition, on July 11, 1995, the Bosnian town of Srebrenica, a declared United Nations safe haven, fell to the Serb military forces led by General Ratko Mladic, who along with his forces slaughtered more than 8,000 Bosniak men and boys within a five day period, marking the final act of brutal ethnic cleansing and genocide in Bosnia and Herzegovina.

Last July, the Appeals judges at the ICTY reinstated a genocide charge against Radovan Karadzic and pointed out to evidence that Karadzic and members of the joint criminal enterprise “had decided that one third of Muslims would be killed, one third would be converted to the Orthodox religion and a third will leave on their own.”

On behalf of all concerned citizens of the United States and Bosnian Americans, ACBH stands by the U.S. and EU policy of a united, multiethnic and democratic Bosnia and Herzegovina and strongly condemns any distortion of what happened in Bosnia and Herzegovina from 1992-1995. Instead of focusing on the glorification of war criminals, ACBH encourages organizations such as the Serbian Institute to promote peace, stability, democracy and the rule of law – all items that will enrich the lives of not only Serbs, but all people of the Southeast Europe region.